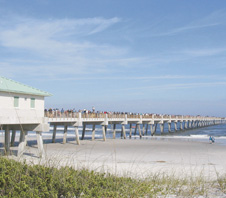 Millions of dollars in both public and private investments have flowed through the beaches communities in recent years as a wave of oceanfront re-development has taken place. But, you have to look closely to see which beaches community has benefited the most because the three cities of Atlantic Beach, Neptune Beach and Jacksonville Beach all seem to weave together along Third Street, which is also A1A. A number of hotels have been demolished altogether as developers make way for new, rather tall, trendy upscale condominium developments. The last decade has seen Atlantic Beach establish a “Town Center” at the foot of Atlantic Boulevard and Third Street. It’s an entertainment and restaurant complex that attracts young and old alike. City fathers in Jacksonville Beach, along with the City of Jacksonville government, have teamed up to fund a new pier expanding into the Atlantic Ocean. The upgraded SeaWalk Pavilion offers a spectacular oceanfront venue for festivals, concerts and outdoor movies. The area around the Pavilion has been upgraded and improved tremendously offering shops, restaurants, as well as charming office space and city offices. The beaches communities offer a large number of festivals during the summer months beginning with the Annual Opening of the Beaches. Other festivals include Fiesta Playera, a celebration of latino culture filled with great food and soulful music, and the popular Springing the Blues festival.

Once considered a sleepy fishing village that gave birth to the world class Jacksonville Jazz Festival, Mayport is on the brink of a renaissance. Look for plans to come to life to create a thriving “Town Center” where retail and new home construction will peacefully co-exist to bring new families to the area.